So it turns out Plácido Domingo is a big deal.

I had such a great time with Sima Cunningham at Calumet that I started looking back over the month, and I realized that the past month or so has been a feast of Yerevan musical offerings.

At our All Volunteer Conference a few weeks ago, I was sitting next to a friend of mine, Kath, who was interupted mid-knit by another volunteer with ticket news.  They’d be buying all the seats that afternoon.  My ears tend to prick up any time I feel like I might be missing something.  I blame this on Rizzo the Rat in A Muppet Christmas Carol munching a gala apple and explaining to his co-apple-vendor, “I’m creatin’ scarcity.”

I asked what they’re buying tickets for.  “Placido Domingo,” Kath says.  “He’s one of the world’s three great tenors. There’s Pavarotti and Carreras, and–”

After committing, I ended up with a very expensive ticket, one that cost almost a fifth of my monthly income.

“It’s worth it,” Kath explained.  “In the States a ticket like this could run you $200 if you could even get one.”

After the concert of course, after I was able to get to Wikipedia, the picture would become clear.  Apparently he’s not just one of the three great tenors, he’s one of what the world calls ‘The Three Tenors’.  He’s had a ton of parts the sheer number of which bowled me over.  But let’s get real.  He’s been knighted by Queen Liz II.  He’s received the Presidential Medal of Freedom from the US and gotten similar awards from Spain, France, Portugal, Austria, Lebanon and even Malta (Hey Malta!).  He’s got 9 Grammy’s including one for some Mariachi work (Ay ay ay!).  Dude is opera-swoll’.

On the days preceding the concert, I turned down invites to other activities and when asked, I couldn’t remember the guy’s name.  He was known in my conversations as ‘Pablo Pirhana’ right up to the taxi ride to Yerevan’s Sport Complex Concert Hall.

Despite an incredibly impressive marble on marble on marble foyer, the hall itself creaked underfoot; uneven stairs were not-so-masked by dusty carpet.  When the lights went down and Domingo came out, after he had already started singing, not one, not two, not even three, but four sets of Armenian concert-goers climbed over my lap to get to their seats.  Ushers, not in uniforms but in typical Rabiz wear, answered their phones and even called out to each other over the trying-to-be-rapt audience.

But they couldn’t keep it up for long.  The guy flexed his vocal chords too damn hard for anyone not to pay attention.  And in between his three minute triumphs, soprano Ana Maria Martinez trilled and frilled herself right into my musical dark places and lit up some of those unclaimed rooms, filling them with some kind of new affection for music.

There’s something about opera, it seems, that transcends.  I didn’t know this before.  When I’d go see some well-liked artist play, say Sufjan Stevens or Eisley or more intimate shows like Final Fantasy or whatever, those players made me want to go home and grab my guitar and belt out a few in my room.

But this.  This I can never do.  Those movements, those swings and dips and warbles and leaps and flights I will never hear coming from my own throat.  Here these souls were, waddling out onto stage like any old sally or jim in fancy clothes, but then they sing.  They sing; I melt.

At one point I turned to my friend Pat, “My toes are curling.”  And after every song, I found myself clapping uncontrolably.  That actually happens.  It’s not just done by characters in Looney Tunes or in some movie like August Rush.  It happens in real life.  You’re with them, carried somewhere, and when you land you are thankful and in awe.

It’s like this: Last winter I was considering adopting a dog.  On my walk to work I noticed a few black and white puppies living under a rusty container serving as a construction site’s office.  Seeing my interest, one of the workers asked if I’d like to hold one.  I said, “Yes, the black one.”

He then dove under the container up to his waist, grabbed the hind leg of that puppy and dragged it screaming to the ground in front of me.

“No!” I yelped and reached down to cradle it.  I took the thing into my hands and puppy-whispered her.  I rubbed the back of her neck, her ears.  I scratched her belly, holding her away from mine when I noticed the hundreds of fleas scurrying across her skin.  She went still, limp in my hands.  She looked at me, motionless while I rubbed her fur and whispered a still sound to her.

When I put her down she didn’t move.  She just crouched for a few seconds as if she’d had an out of body experience.  Some being had lifted her miles into the air, made her feel wonderful sensations unlike anything she’d known before, and then placed her back where she was as if it might never have happened at all.

There was an error retrieving images from Instagram. An attempt will be remade in a few minutes. 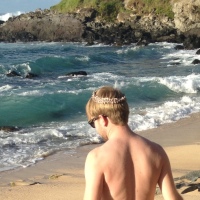